Nematodes (roundworms) constitute a highly diverse animal phylum. Up to 4100 species of plant parasitic nematodes are currently identified. Many species of nematodes are parasitic on crops, such as potatoes, sugar beets and soybeans, and result in up to 180 billion USD of economic losses annually in agriculture worldwide. A high-throughput analysis of nematodes from soil samples allows for a fast quantification of nematode infestations as well as for the characterization of the nematodes, thus advancing both cyst monitoring and resistance screening of plants.

Currently, soil sample analysis relies on hand-picking nematode cysts from organic debris, where the amount of debris depends on the particular sample extraction method. Manual counting is a time-consuming task, and counting accuracy is affected by subjective decisions and the ability of the human counter to remain concentrated. Meanwhile, the main quantitative measure of soil samples is limited to the count of cysts, eggs and juveniles. We aim to extract richer phenotypic features to characterize the nematode population, which is also not feasible through manual processing.

Figure 1: Detection of endpoints, skeleton and segmentation of nematode juveniles

The overall aim of this research project is to build a high-throughput system for analysis of nematodes in soil samples, including nematode cysts, eggs and juveniles. A robust instance segmentation pipeline is the key step, which is challenging due to the highly cluttered collection in the image. Besides optimizing the segmentation pipeline, the counting accuracy and robustness of extracted phenotypic features will be explicitly studied. 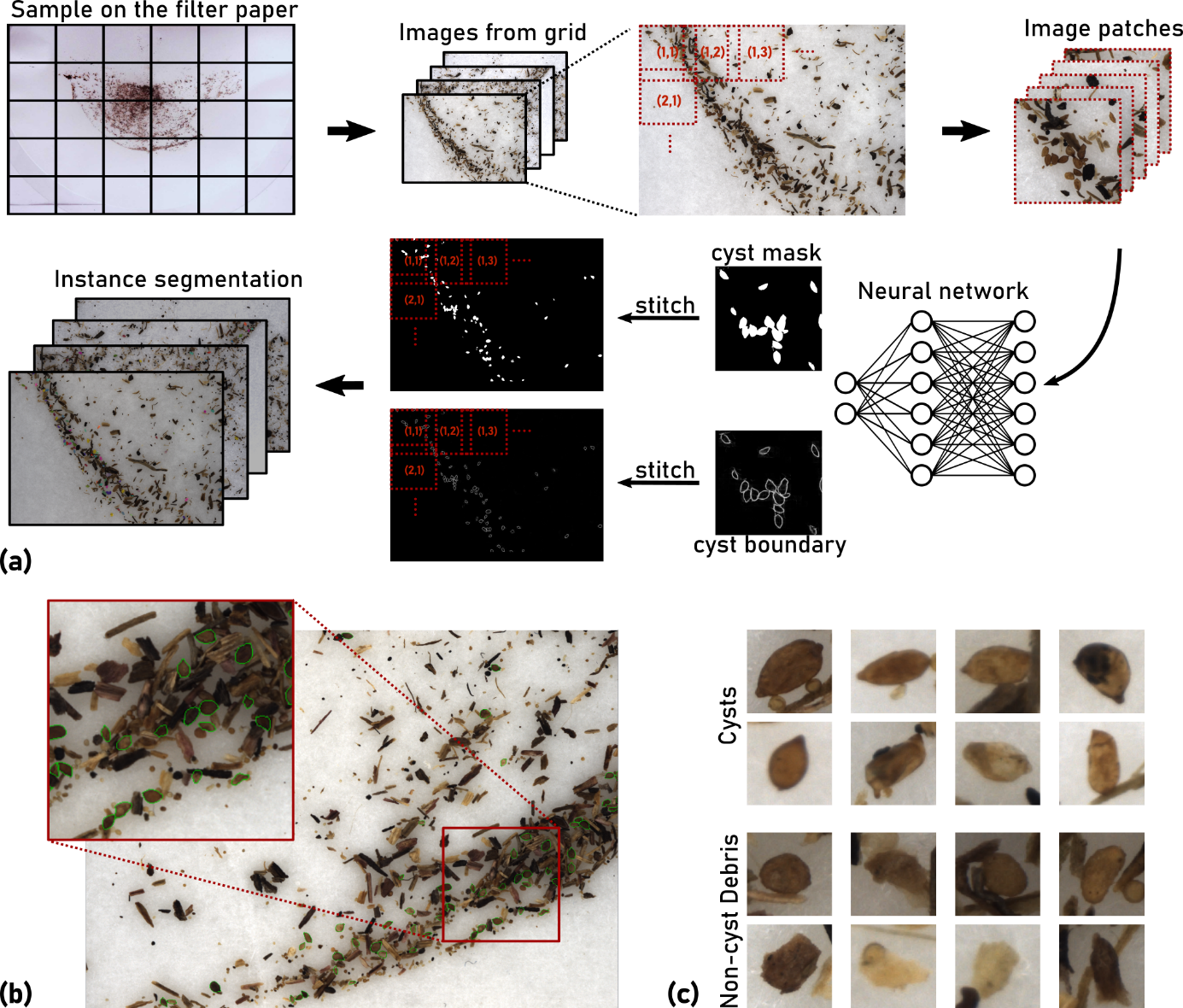 Figure 2: Computer vision pipeline for instance segmentation of nematode cysts. a) A high-resolution image is partitioned into tiles that are processed separately. A deep learning model predicts the cyst mask and boundary. The boundary prediction is responsible for separating touching cysts. Detection of endpoints, skeleton and segmentation of nematode juveniles. b) Microscopical image of a soil sample extract containing nematode cysts (annotated in green) and organic debris particles. c) Examples for nematode cysts and debris particles that resemble the cysts.

New theses are regularly advertised in the area of Image-based Phenotyping of Nematodes. In addition to the general overview, there are also numerous topics that have not yet been advertised, which will be gladly presented in a personal conversation.

By continuing to use the site, you agree to the use of cookies. more information